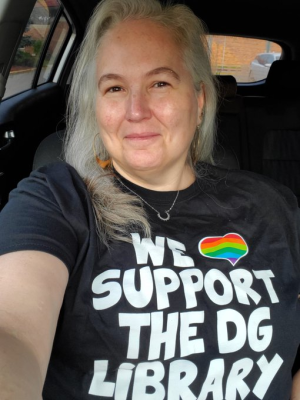 The Downers Grove Public Library announced at its September Board meeting that it had received 1,215 comments in response to its planned Drag Queen Bingo for teenagers program, with a clear majority in favor of holding it.

On September 12, the Library was forced to cancel the planned event on National Coming Out Day, October 11, due to threats of violence which were forwarded to the Downers Grove Police Department and are under active investigation. The program was full with 40 registrants in grades 7-12 and had a long waiting list. A news release from the Library stated, “It is our responsibility to keep you safe. We are disappointed and saddened by some of the vitriolic feedback that we received.”

Comments submitted to the Library after the cancellation showed an even greater increase in support for the program, with 82% sharing positive responses to only 14% negative ones.

Kathryn Deiss, EQDG’s co-chair, stated,“EQuality Downers Grove (eqdg.org) unequivocally supports the Library director and the Library’s professional staff in creating programming for the LGBTQIA+ community. We look to facts, not assumptions, and the facts clearly indicate that the majority of the Downers Grove community supports us and supports the Library as a vital and civic resource for all. As we celebrate the start of LGBTQIA+ History Month, EQDG is grateful for the community’s clear support of LGBTQIA+ adults and youth.”

“It’s great to see the numbers that back up our community support of the Downers Grove Public Library’s diversity, equity, and inclusion efforts, in this case with LGBTQ+ programming,” said Erica Neidlinger, a 15-year resident of Downers Grove, “This event was to extend support to a vulnerable portion of our youth.”

In its September 12, 2022 news release, the Library thanked everyone who sent messages of support and reaffirmed its commitment to essential inclusive programming in Downers Grove.